Andrew The Elf: Taking Flight to Save Lives for St. Jude

Posted September 15, 2021 in All StarLibrary

For those of you who do not know me, my name is Andrew Dean. I am the owner/photographer for a cheer and dance photography company that works strictly in the spirit industry. My first introduction to St. Jude Children’s Research Hospital was at CHEERSPORT years ago when I was photographing Friday Night Lights. I remember listening to the interviews athletes and peers would give about their experiences working with St. Jude and then to hear the interviews from the patients was even more powerful. Many of my friends that work for Varsity have had the opportunity to tour the hospital and shared their experiences with me. Seeing their faces brighten up and glow as they talked about St. Jude was powerful and got my mind spinning. I asked myself, “What is something unique I can do to help?”

My goal in life has always been to make an impact in whatever I do and interestingly enough the biggest impact I’ve been able to make is doing something that I originally thought would do nothing more than bring a little laughter and cheer to fellow travelers: Dress as an elf and book a round trip ticket around the country that would have me depart in the morning and come back home that evening. If anyone asked what I was doing I’d simply give them a business card with a donation link and let them know I’m flying around spreading holiday cheer and raising money for St. Jude!

I’d also share the adventure on social media with friends hoping to grab some interest and donations along the way. I set a goal to raise $1,500 over the course of my 20-hour journey, a goal that I thought would be impossible at that time.

The morning of my flight I woke up, threw on the elf costume, took a quick picture and shared it on Facebook along with a link to my donation site for my friends to share and headed to the airport. People instantly began asking what I was doing which opened the door to sharing my love of making people smile all while trying to raise money for St. Jude. I boarded my plane, turned off my phone and we took off. Two hours later when we landed I turned my phone back on and the first email I saw said “Congratulations! You’ve hit your goal!” I figured there was a mistake made somewhere so I checked the rest of my inbox to see over 50 emails from people who donated to the cause helping us raise over $1,700 in the first two hours of the fundraiser. From there the fundraiser went viral and ended up raising over $13,500 during the 20 hour journey!

A lot has changed since that first fundraiser. I have had the opportunity to build partnerships with Delta Air Lines and St. Jude Children’s Research Hospital. I’ve worked closely with individuals at Varsity who assist with sharing information throughout the adventure and had the incredible support of countless gym owners and coaches along the way as well.

The last year has been a challenge for all of us, we’ve had to find new ways to go about doing what we do and fundraising is no different.  When I started planning this years fundraisers for St. Jude I really had to change my mindset and expectations, I also had to add quite a few steps for public health and safety purposes.  At times I even thought that this might be the end to the costumed fundraisers, luckily that was far from the case. In the past these fundraisers have always thrived because I was always on planes and airports full of people, this year I had to pick flights that were mostly empty and avoid a lot of the close one on one conversations I usually have and rely heavily on the social media posts that I made and hope others would get involved.

In a year that was so difficult for so many I was pretty convinced that even though St. Jude Children’s Research Hospital is an incredible cause, people might hold back and not be as giving as they typically were.  Turns out I was wrong!  During this year’s #AndrewTheElf adventure, I flew on 6 flights which were all about a third of the way full and when you combine the inflight donations with the online donations over $15,000 was donated in 30 hours.  This year was also the return of the #AndrewTheLeprechaun fundraiser which was done the week of St. Patrick’s Day and that fundraiser brought in an additional $5,227 in less than 20 hours, almost doubling any of the Leprechaun flights from the past.  When combined with the previous fundraisers, this brings the costumed fundraising total for St. Jude to over $100,000 since the fundraisers began in 2016.  More importantly, it shows that even in the hardest of situations, people are still willing to give and share their generosity in difficult times.

Going forward, these fundraisers will continue to evolve as I continue to find unique ways to keep people engaged and willing to give, which is all part of the fun of any fundraiser!  My question to you as gym owners and coaches is what have YOU done to get involved?

Think about your gym. Say you have 80 athletes and decide that you want to Team Up for St Jude. If all of your athletes participated with the goal of raising $100 per person you would be able to raise $8,000 for St. Jude. Once you complete your fundraiser, challenge another gym to get involved and do the same. Not only are you doing something great for an incredible hospital, but you are teaching your athletes about the power of teamwork and doing something that will truly make a difference to the children at St. Jude.

Our industry is a special place and we are all in this together. Join me this season and let’s Team Up for St. Jude! Teamwork, Dedication, Confidence, Leadership – this is The Varsity All Star Pinnacle Award. The Varsity All Star Pinnacle Award was created to recognize athletes that exemplify exceptional leadership qualities and dedication to all star. This award is based on the four characteristics of #AllStarStrong – Teamwork, Dedication, Confidence, and Leadership. Pinnacle Athletes are leaders, encouragers, […] 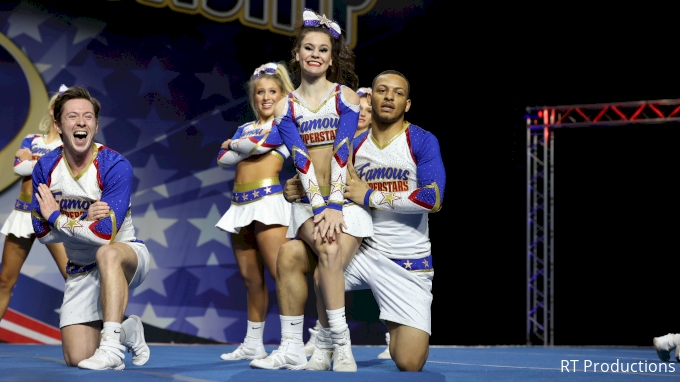 The final championship events are here, and small gyms are at the peak of their season ready to prove they have what it takes! Prepare for show-stopping performances as we approach The D2 Summit 2022 and will soon find out who takes home the top spot in each division!

It's almost time for an epic weekend of All Star Dance set in the most magical place on earth! The Dance Summit 2022 is designed to give the most competitive non-Worlds dance teams the chance to conquer the climb and take home the gold medallions.