The month of November can be a frantic time for cheerleaders with regional and state competitions in full swing, the holidays right around the corner, football season coming to a close, and basketball season fast approaching. Here are some ideas to help make the transition between fall sports to winter sports smooth.

Plan a football to basketball conversion practice.
Review all of your cheers, replacing football lingo with basketball terminology. Change “touchdown” to “basket,” “first down” to “rebound,” “field” to “court,” and “six points” to “two points.”

Here are some ideas from this summer’s material to get you started:
• Get that ball Get Tough Cats X Get that Ball X
• Take that Ball X Down that Court X Basket X Go Dragons
• Bounce X Bounce to the Hoop Tigers X Shoot Two
• Defense X Get Tough X Steal that Ball
• We Want a Basket Knights Score Central Score X

Do a gym walk-through.
Plan where you’re going to stand to make a tunnel and make some run-through signs for the team. Mark where you are going to stand for the player’s introductions, and explain to new team members how your squad shows spirit for each player (i.e. jumps, stunts, tumbling). The opening line-up/player intros can be a great place to get the crowd conditioned to join in on a “catchy” clap with you. Once the announcer has finished with the opposing team’s starting five, start your clap (X, X, XX-X). You can clap in spirit lines or you can synchronize stunts for your starting five players. Either way, you can continue the clap in your stunts since they should be EASY stunts that you can successfully perform while leading the crowd (chairs, shoulder stands, shoulder straddles, extensions).

Quarter/half-time cheers. Use signs and make them very crowd-oriented. Practice spacing to maximize crowd coverage. This is a great time to use your competition cheer. It’s okay if your crowd has already seen it. The more the crowd sees it, the better they’ll know the cheer, and the more likely they’ll yell with you!

Develop a “general” philosophy on point spread and what type of timeout it warrants. If the game is within ten points, only do “green and gold” timeouts (something very traditional). Leave a core group on the floor to begin the sidelines and have others moves into the crowd and follow along. If it’s a blow-out, do a lot of fun timeouts (YMCA, Dr.Who, etc.). For all other situations, the timeout depends on the game and what is going on (defense or offense).

“Green and Gold” Timeouts — Your Traditional Timeouts
Make sure you are spread out and facing every direction in your arena, and use the entire floor. If you have a dance team, incorporate them into what you are doing. This is the ideal time to perform your school’s fight song. Establish a set routine for the fight song with motions and easy stunts to lead the crowd with. Learn the words to the fight song and sing them along with the music.

Some timeouts are longer than some songs, so you may need to do at least two things for every timeout. Immediately after the fight song ends, always do a specific “crowd-oriented” sideline. Establish set places to go during that sideline along with certain stunts. If you’re using signs, remember you’ll always need to bring them onto the floor before the fight song.

Don’t alter this routine. The fight song and this particular sideline always go together! Condition the crowd by this repetition. There should be no thinking involved for the crowd. They will  begin to learn that the two are attached. Think up a couple more “green and gold” timeouts with this same format. Use the same combination of fight song/sideline or band chant/sideline each time.

Another great timeout idea is running flags. Flags can go at just about any time during a timeout, but it’s usually best to send the flags as soon as the timeout starts so you don’t have to worry about running into players that are re-entering the court at the end of the timeout. Run the flags down the court and then back to the center, wave them at the center, and then exit the floor.

Have your coach ask the basketball coach what your state’s sports association’s policy is on how close you can be to the court and when you can cheer. This shows your genuine interest in the players and the team by making sure nothing you do will cause a penalty against your team. Then tailor how you cheer to your state’s rules.

Don’t forget to assign new cheerleader/player buddies for locker decorations, candy bags, etc. The basketball players often get overlooked at the beginning of the season because football season isn’t quite over yet!

Know the formations you plan to use. Here are some examples to get you going.

2-2-2 FORMATION
Before the game starts (usually 15 minutes on the clock until 10 minutes on the clock), send many of your cheerleaders into the stands (to their 2-2-2 sections) to say hello, introduce themselves, maybe hand out flyers with words to sidelines, hand out shakers, etc. Sending people to the same places every game also develops a relationship with the people in the crowd because they will see each other all year. The idea is that if the cheerleader goes through the crowd and introduces him/herself, then when they are down there on the floor in front of that same section, the crowd is more likely to do what they ask them to do (stand up, yell, etc.)

“SPLIT THE FLOOR”
“Split the floor” is a great formation for sign, sideline, and flag timeouts. It clears the middle of the floor for flags. It also allows the cheerleaders to move from the baseline to the sideline with music and then get set for signs or a sideline. If you use “split the floor” and label one side of the arena the “green/go” side and the other as the “gold/Mason” side, then the crowd will always know what sign they are, and they’ll always know what to yell!

“X” FORMATION
The “X” Formation is another great formation to use for band chants and your fight song. Alternate cheerleaders (stars) and dancers (rectangles). Include all of your “spirit” groups, and fill the entire floor! 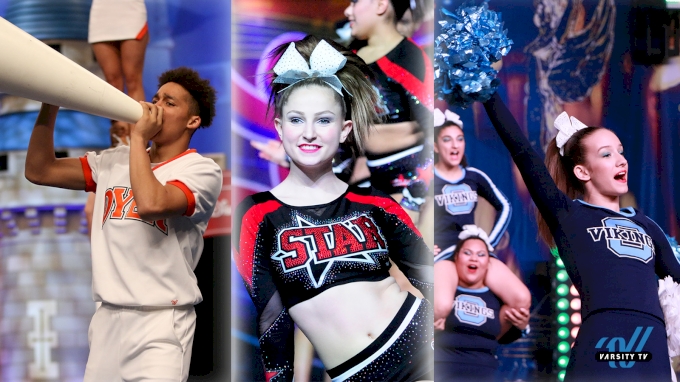 It's the final competition weekend in February and Varsity TV is gearing up for all the cheer and dance coverage from two live and five virtual events streaming February 27-28, 2021.

Whether you tuned in to watch the Super Bowl or just to see the commercials, there’s a good chance... 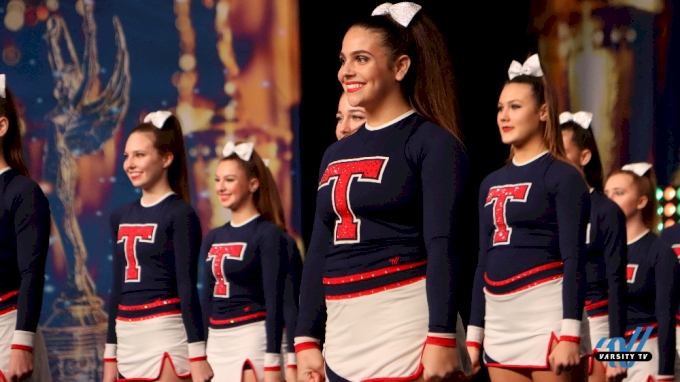 This season might look a little different, but Varsity TV is determined to bring the same great USA championship atmosphere you have come to know safely and virtually to you in this virtual championship.